TECHNOLOGY IS AT THE HEART OF AFRICA'S DREAM

May 03, 2015
I remember the first time a computer made an impression. It was in 1993, and I was living in Nanyuki an outpost town in Kenya (at least back then). I was ten, and I had gone to visit a programmer who had been hired by a research team studying Mount Kenya and the ecology around it. Although most details are hazy today, I remember the programmer, I really thought he was the most intelligent man alive and everything that came out of his mouth was the golden truth. I promised myself that one day I would own and operate a computer like him. I was one of the first students in Kenya back in 1997 to take up IT as a subject in high school, I honesty think that was a blessing because we had a volunteer from the UK who had experience in developing software, he took us through three of the four year in high school, it is through him that we really dug into C++, C and Pascal programming languages. It is from here that some of my colleagues eventually found themselves working in the Greater Seattle area for Microsoft, and a few other multinationals.

Over the last twenty years, my generation has seen tremendous change and disruption in what was once believed to be culturally acceptable.  Many of us migrated to the cities in search of a better education and life. Many more dreamed of travelling to Europe and America to get a better livelihood.

The reality is that for those who go to Western countries, a minority actually became great successes, but a far greater percentage end up barely surviving and live from hand to mouth, or worse still die in the high seas having not arrived at their safe haven.

As all this is happening the great majority of Africans are young, unemployed, and uninspired. They lack mentors who can train them in catching the proverbial fish that can sustain them through life. The kind of education they receive in public schools is only reflective of the lack of focus seen in how governments are run across Africa. Teachers are few, underpaid and overstretched, ill equipped to educate much less mentor the flood of children left at their school gates, by a population barely making a living.

I have visited swatches of land around my country where there is no trace of a human being, while in the cities there are moments when you cannot walk on a straight path because of the density of human traffic choking the life out of our cities.

And while this is the state of affairs in all African countries, statistics shared by World Bank and Bloomberg point to Africa for strong economic growth.  Is this a contradiction? Or is this gradualism at work. Where despite the harsh reality that disease and poverty is still ravishing Africa, the continent is getting better a man at a time.

Most of my writing points to a bright future for Africa. In this article, I would like to explore the theory that technology is the centerpiece of this vision becoming a reality. And for me the technologies that will drive this change include social media, mobile computing, data analytics and cloud computing.

How have these technologies altered the African landscape?

The mobile phone has collapsed the distances that once made communication impossible between relatives in the city and rural areas. Research also confirms that mobile phones are effective as means of searching for labor-market information, which then drives migration among rural populations.

The mobile phone has also been lauded for being the tool that will allow financial services to reach the unbanked and underserved rural populations inexpensively and/or cost effectively. But many of us forget that once upon a time, banks would visit rural outposts once in a few months to offer their services to a rural community; this was never a successful venture.  With mobile phones and the ecosystem it has created, we now have banking agents, who for an affordable rate can offer increasingly complex and higher value financial services to villages across the developing world.

Seven out of ten Africans are farmers, but they are far less productive than their counterparts in other continents, why? There is a disconnect between the agricultural research being done, and its dissemination to farmers across the continent.  There is lack of better food storage, lack of knowledge around use of fertilizer, crop rotation, timing and planting techniques. The process by which farmers get this information is called agricultural extension. It was traditionally expensive and complicated and required highly trained agricultural experts to travel and engage the farmers. However, today, the mobile phone can deliver this service, inexpensively and effectively. 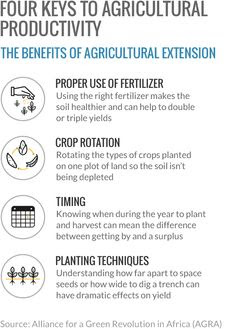 The other dimension to this story lies in the elimination of the middleman, who usually depends on the poverty, ignorance, lack of information, short window of freshness, and the exorbitant cost of distribution that face most farmers across Africa.  They buy fresh produce at rock bottom prices in the rural areas and make a large profit by selling these produce in urban areas, where food is desperately needed.

The answer here lies in the creation of cost efficient networks that can effectively allow farmers to negotiate better prices with their consumers, which in the end affords them higher prices.

In Kenya, for instance, there is a quiet revolution brewing as young professionals are going back to the farm and using better farming practices and adopting the latest farming technologies. And they are using social media to educate, inspire and collaborate with each other.
Technology is altering both how we educate Africa, read here, and how we deliver health care, read here.

SMEs contribute greatly to the African economies. Despite this, most are not part of the formal economy and are severely hampered by a weakly developed business environment hampered by red tape, corruption, complex entry regulations and few incentives to become a formal part of the economy.

A case study on the awareness of cloud computing by SMEs in South Africa, uncovered that most of the respondents had very low, to low understanding of cloud computing and the terminology used and how it could benefit their businesses. And while there are counter-arguments to adopting cloud computing, the truth is that Africa is ripe for its adoption predominantly because it allows us to utilize infrastructure, human capacity and experience that is lacking across the continent. It allows SMEs to compete favorably internationally.

The conversation leading to the adoption of cloud computing in Africa needs to be basic. African SMEs need to also understand that when they are using Facebook, Google mail or WhatsApp they are actually utilizing the cloud.

With time more technology innovations will arise that will target the individual SMEs as technology incubators, hubs and competitions like Pivot East become established across the continent.

In conclusion, I believe because of technology, Africa is witnessing explosive but gradual change that will empower the continent. But am sure you already know that!