THE DINOSAUR AND THE AFRICAN TELCOS

A long time ago, before the industrial revolution and before the Dark Ages, one of the primary means of long-distance communication was the smoke signal. In most instances it relayed a need for people to assemble and advance a cause. It facilitated the social agenda, which has been a pillar for our species dominance of the planet.

The ignorance of the Dark Ages was because of the curtailing of ideas and turning everything new into a heresy. This was further propagated by the fastest transportation systems then in the form of horses and sail ships. Fortunately, this ignorance waned with the introduction of the printing press. But it was with the introduction of the telegraph-an innovation of the industrial revolution and Samuel Morse’s first public telegraph message, “What hath God Wrought?” in 1844-that the world became a lot smaller. For the first time, it was possible for humanity to communicate almost instantaneously despite distance and location.

The telegraph business model required it to function across great distances; over land and undersea, and begged for a high initial investment. Due to lack of support, the patent holders had to settle for licensing their innovations to regional companies that eventually consolidated into national monopolies with checkered relationships with governments.

The industry’s initial challenges educated the commercialization of later inventions in the telephone, radio, television and satellite systems. Some of these innovations were driven and embraced, in most cases, by companies that had already achieved success through previous inventions like AT&T, GE and Westinghouse.

Today, global operators like MTN, Airtel, Vodafone and Orange S.A. own mobile network operators in Africa partly or wholly. This is largely attributed to previous decades when telephone companies in Africa were poorly run, state-owned monopolies that offered sub-standard services, with job security, cronyism and corruption being their primary focus. For this reason while the world advanced Africa lagged.

In the 1990s, the privatization of these state-run companies and the deregulation of the telephone markets, effectively transformed Africa for the better. Suddenly the intent was profitability that resulted in competition, which was reinforced with the issuance of several GSM licenses in countries across the continent.

While this was happening, the Internet had matured over the decades from a military experiment to a mainstream solution that promised the universal connection of every living person in the world.

The Internet evolved because we are social beings.  From the Bulletin Board Systems (BBS) of the 60s and 70s when hobbyists aspired to share, discuss and collaborate, to CompuServe’s mainframe system in the 70s and 80s that allowed the sharing of files and access to news and events, to AOL’s member created communities in the early 90s, to the late 90s ability to create personal profiles, invite friends, organize groups and search other user profiles brought about by sixdegrees.com, and asianavenue.com. To the evolution of the social networking sites of the early 2000s including MySpace (2003), LinkedIn (2003), Facebook (2004) and so forth.

The story behind this evolution has always been about choice and freedom for the end user.

Over the last century communication has shifted and changed with various technologies converging on Smartphones that cost less than $50. More services are using the Internet for voice, data or video. And the speeds of these advances are outstripping the return on investment for the average African Telco, which is still grappling with the need to connect large areas of rural Africa.

The flipside is that Over The Top (OTT) providers have grown astronomically over the last decade as they have met and exceeded the needs of their users who were previously offered uninspired, overcharged services by their Telcos.

Flash with cash OTT providers have innovated and acquired their way to a critical point where they are connected to the aspirations of the global Internet user.

We live in a society where participation is fundamental. The organization that wins online allows the human of today, to create unrestricted. One that can create a fertile ground for a person’s ideas to be appreciated and accepted by likens. Fundamentally we are human and we are social. It matters not whether we achieve this through blogging, photo and video sharing, instant messaging, conferencing or newer features available on social media networks today.

There is a technology disruption affecting Telcos as their niche and mass-market services slowly become commoditized and democratized by services offered by WhatsApp, Skype and YouTube. 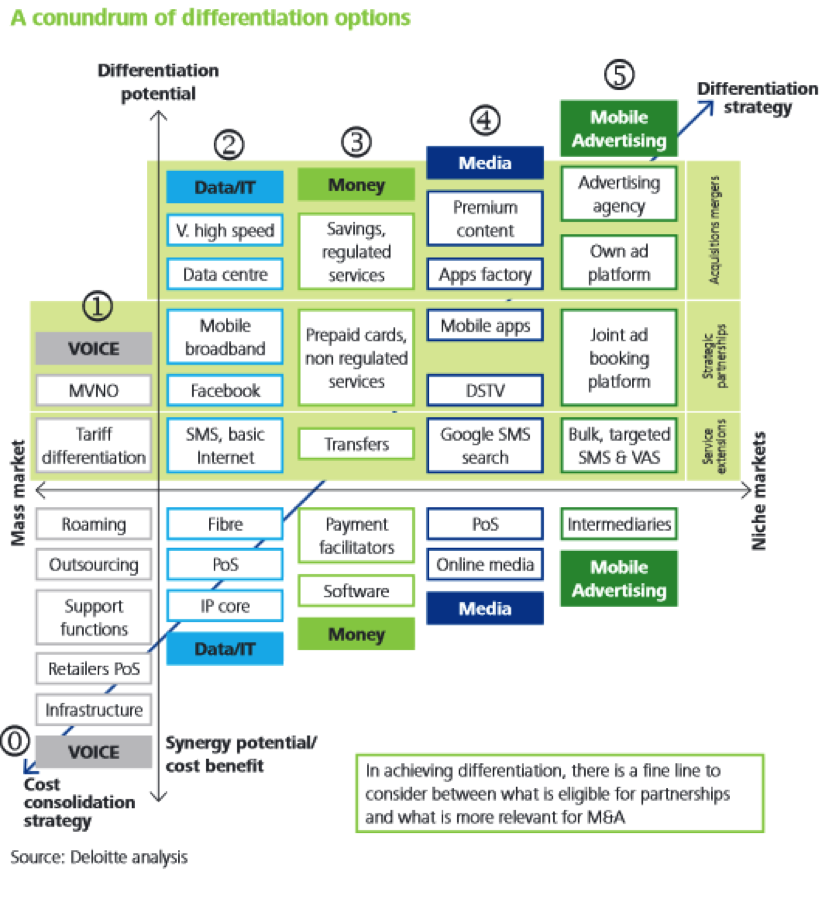 Most Telcos in Africa have not positioned themselves strategically, as technology seeks to blur the divide between the physical and virtual world.

And because they have been unable to break into the rural frontier, due to spiraling costs, the low-orbit satellites that Google and Virgin are deploying is starting to look more enticing compared to mobile phone masts (Even if low-cost solutions like village telco used).

Is the future geared towards having less bulky satellite phones with Smartphone features? Will companies like Iridium innovate for Africa?  Will the partnerships that OneWeb speak about with Telcos work?  In the short term these questions can be answered in any direction.

We anticipate more Telcos will lobby governments to stop losing revenues. Simultaneously, there will be further consolidation of Telcos across the African continent. Telco 2.0  strategies will take root, but have mixed results given that most Telcos lack the chutzpah to compete against OTT players. It will be like Kodak trying to compete with Instagram.

Some will survive and some will be powerless against the changes happening.

What I do know is the world is becoming more open; people and things are becoming more connected. The future ‘provider’ who will create tools that empower people to make choices will find great success and thrive.

Lessons From a Funeral

March 08, 2022
A couple of weeks ago, I visited a church. My bike rider kept going further down a dusty path with nothing more than white chalk to direct us along. The noise of the poorly fueled motorcycle kept me focused on an important topic: death. I believed we were lost and surfaced from my trance. "I think I'm going to that church." "Which one?" "That one," An attempt to have a conversation since there was nothing else for miles around except banana trees and maize fields. "The one with the large cross at the top." I entertained my new friend, my inner eyes-rolling. "Woah, that cross is big, bro," I nodded in agreement. We had become fast friends, him sharing his life in intimate detail in the thirty minutes it took to get there. The cross grew more prominent as we got closer. What structure lay below it? Could it support all that? I had arrived at a funeral. Expensive four-wheel-drive cars clogged the large parki
Post a Comment
Read more

August 24, 2014
One of the hardest things to embrace and accept in Kenya is that the public education system that a majority of us have gone through is a failure in its entirety and no matter how many patches we apply, or clutches we give it to stagger on, it still is a failure. Typical Classroom in Kenya Don’t get me wrong it worked fine in another century and a different generation, but its usefulness ended a long time ago and just because factories are producing typewriters it doesn't mean every person has to learn how to use one. Let me clarify that statement, the problem with the public education system is that it is predicated on mechanical mass production where people go through a moving conveyor belt called the education system. They are grouped by age and expected to go through higher and higher levels of indoctrination so that at the end of the production line, they conform to a specific ‘quality’ assurance criteria that renders them ready to join other similarly standa
2 comments
Read more