One of the hardest things to embrace and accept in Kenya is that the public education system that a majority of us have gone through is a failure in its entirety and no matter how many patches we apply, or clutches we give it to stagger on, it still is a failure.


Don’t get me wrong it worked fine in another century and a different generation, but its usefulness ended a long time ago and just because factories are producing typewriters it doesn't mean every person has to learn how to use one.

Let me clarify that statement, the problem with the public education system is that it is predicated on mechanical mass production where people go through a moving conveyor belt called the education system. They are grouped by age and expected to go through higher and higher levels of indoctrination so that at the end of the production line, they conform to a specific ‘quality’ assurance criteria that renders them ready to join other similarly standardized and sanitized group of people who will fulfill the economic agenda of the industrial market.

The only problem with this approach is that while it was well suited for the industrial revolution of the 19th century. It is maladjusted for the 21st century and beyond.

The period between 18th and 19th century was unique in that it was the first time that millions of people living in abject poverty across the western world were able to leave servitude in the farmlands and productively take part in mechanized industries that progressively offered better wages.

This altered the social hierarchy and necessitated a transfer of wealth; a middle class arose that was more assertive and politically enfranchised and it demanded for more government involvement in state affairs. In time legislation was enacted in England and other industrialized countries to ensure schooling became compulsory.

With industrialization governments realized that more could be gained from a literate population. Subsequently, the education system was modeled around the prevailing economic requirements of the day. Studies show that part of the reason Prussia overtook England by the late 19th century in many sectors was due in part to its concerted effort in educating its population.

Having said that it’s imperative to note that the education system was designed and conceived in the intellectual culture of the enlightenment, which lay emphasis on academic ability predicated on deductive reasoning and knowledge of the classics.

The genetic makeup of public education today is based on this logic, which then proceeds to group people into two: the academic and the non-academic, those who are smart and those who are not. Woe unto you if your lot is cast in the ‘not’ group.
Because of this, more and more people have checked out of the system literally or mentally way before they graduate stifling their ability to learn.

It is unfortunate that with time this model of education has remained and become more entrenched.

Today more than ever before the public school system destroys divergent thinking, which has come to be appreciated as essential for creativity. Apparently, high IQ does not guarantee creativity.

"In 1968, George Land gave 1,600 5-year-olds a creativity test used by NASA to select innovative engineers and scientists. He then re-tested the same children at ages 10 and 15. The test results were staggering! 98% at age 5 registered genius level creativity, 30% at 10 year and 12% at 15 years of age. The same test given to 280,000 adults placed their genius level creativity at only 2% In his book 'Breakpoint and Beyond', co-authored by Beth Jarman, Land concluded that non-creative behavior is learned".

The conclusion is that there is something that happens to people during their formative schooling years that destroys their creativity. They lose more as they become educated. 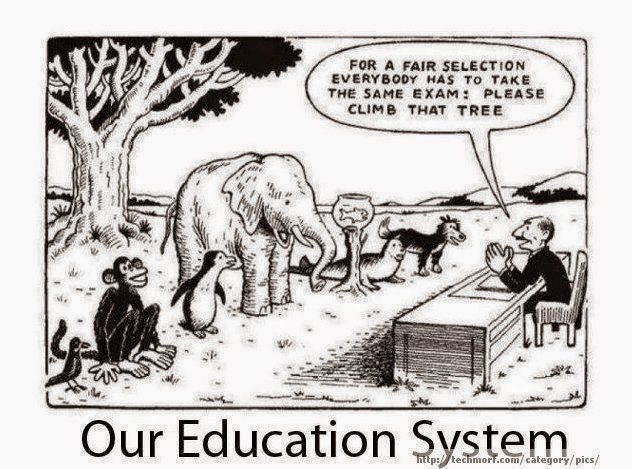 Human beings are diverse and different. No amount of trying to make them similar will work. Most education systems around the world for the longest time have instilled conformity and dissuaded diversity.

Children on the other hand thrive in an education system that celebrates their broad range of talents, because it brings out elements of their psyche that are otherwise untouched.

We need to understand that teaching is a creative profession. It should stimulate, provoke and engage. Education should be about learning; there is no point in educating if there is no learning going on.  The task - teaching has to have an intended achievement - learning. The role of a teacher is to facilitate learning, not to dictate, indoctrinate or control a student.

In the recent past, education systems have focused not on teaching and learning but on testing. When students go to school in order to get a good grade and are propped up by exams, then all they do is memorize, they don’t learn or more importantly acquire skills essential to drive their countries’ economies into the 21st century. 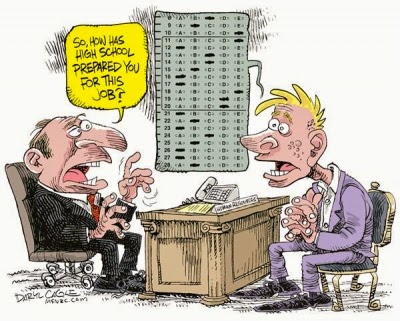 Testing should be a diagnostic tool, not the reason for education; it should support learning and not inhibit it.

If you look at the Shanghai School System, which was noted as the best in the world by Programme for International Student Assessment (PISA) latest report released in 2013, there are pertinent elements that could help any country transform it’s public education system:

Our rapidly advancing world depends on diversity and not singularity of skill and purpose.  Students’ questions are the seeds of real learning. They are the evidence of curiosity and the beginning of divergent thinking. Have you noticed how a 4-year-old child will ask so many questions, and as they grow older this ability recedes? Teachers have to embrace and nurture curiosity from both the students and themselves.

In education, change is highly dreaded, due to the possibility of failure. The messy process of trial and error needs to be celebrated and inculcated. Or else we will still be looking at the same education system 50 years from now, and still wonder what went wrong.

In the final analysis the real safety of a nation lies in preparing the next generation to take up its role, we can only do so if we get our act together in the education sector in Africa.

Mind you I have not mentioned the current situation, or spent time on the education problems that afflict Africa today. And they are many. What I would rather leave you with is a link that directs you to what China as a nation is doing to reform and develop its education system in order to empower its human resource by the year 2020.

Be inspired and lets change Africa.

Your comments are greatly appreciated so keep them coming.

Lessons From a Funeral

March 08, 2022
A couple of weeks ago, I visited a church. My bike rider kept going further down a dusty path with nothing more than white chalk to direct us along. The noise of the poorly fueled motorcycle kept me focused on an important topic: death. I believed we were lost and surfaced from my trance. "I think I'm going to that church." "Which one?" "That one," An attempt to have a conversation since there was nothing else for miles around except banana trees and maize fields. "The one with the large cross at the top." I entertained my new friend, my inner eyes-rolling. "Woah, that cross is big, bro," I nodded in agreement. We had become fast friends, him sharing his life in intimate detail in the thirty minutes it took to get there. The cross grew more prominent as we got closer. What structure lay below it? Could it support all that? I had arrived at a funeral. Expensive four-wheel-drive cars clogged the large parki
Post a Comment
Read more