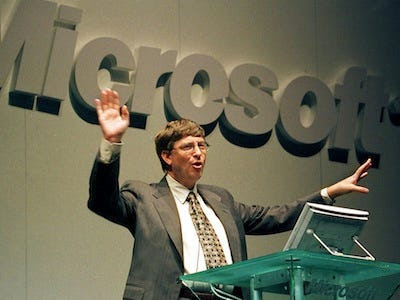 Might it be the fact that Apple continues to innovate cyclically despite its monstrous size? Or is it the fact that Microsoft might end up being the utility firm of the future based on its cloud strategy, which handles the backend of all your essential services;  from banking to shopping, from education to entertainment.
I prefer to look at the people who were at the helm of these firms to do an analysis. I think the visions of both firms are intrinsically driven by the founders of the organizations, the late Steve Jobs and the highly regarded Bills Gates.

Steve Jobs was driven by sublime design and wanted to merge art and high end technology, which he managed to do so many times while breaking ethos barriers; with the Macintosh in the 80s, Pixar in the 90s, and Apple devices by the turn of the century, little is known of his philanthropy. Bill Gates on the other hand, was a pirate in the making, he never really invented anything, but was an A class strategist, who was able to thrust his company to the top and vigorously defend its dominance, against competition, to the detriment of companies like Netscape and Borland Software Corp both relegated to historical annals.

If you transition to today, Steve Jobs is dead, and Bill Gates just added 7 billion dollars to his name and is currently worth $ 61 billion according to “The Forbes 400, September 2012”. Mind you this is despite the fact that he has given away $ 28 billion in his lifetime, and since 2011, spends a majority of his time championing the causes of the Bill and Melinda Gates Foundation, kindly also note that only a fifth of his net worth is actually is based on Microsoft’s shares.

Indeed few people dream of being anything less than wealthy, yet the traditional approach is to horde as much as possible, be as frugal as Scrooge was,  then hope one day you will turn into a 30 –going to 50 something year old billionaire.
Am here to tell you, that is a flawed strategy, most wealthy people give away large swashes of money, which insures that their wealth increases with time, it is a principal with a guarantee.
Let me elaborate, traditionally most wealth accumulated doesn’t last past the third generation. The first generation will work day and night, and cobble together the wealth. The second generation, having seen the blood and sweat spend by their parents will respect the wealth and strive to live up to the high standards set. And finally the third generation with only a distant memory of their grandparents will disrespect the wealth and the fundamentals behind its building and unfortunately squander it, before the cycle begins again.
The wise, wealthy technologist who knows this three generation cycle understands that the only way to break this semblance of a rat race, is to focus on something bigger than himself and his descendants,  and thus he strives to change the world, or his corner of it, and endeavours to  build a legacy that will outlast him.  I can go back in time to numerous kings who did this, but let me use examples that have affected us within our lifetime, the Rockefellers, the Carnegies and the JP Morgans, and more recently Bill Gates, Paul Allen and Larry Ellison, from medical to infrastructural and technological advancement it is hard not to admire these people for how they have changed the world we live in today.
TATA Group, a multinational conglomerate headquartered in India, which also offers IT consulting through its subsidiary Tata Consultancy Services and is considered the most trusted brand in India in 2012 by a poll done by Equitymaster, contributes about 66% of its profits to charity through the trusts that hold a majority stake in it. Through this overt expression, it is no wonder that the wealth that Jamsetji Nusserwanji Tata created as the founder of the conglomerate in 1868, has lasted through five generations of the Tata family unscathed, and continues to grow exponentially.
So I ask you again, do you think you are doing justice to your good name, your children and grandchildren, if you don’t actively and progressively give to those in need or contribute to a cause that will change the world?
The bible states in proverbs 11:24-25 “One person gives freely, yet gains even more; another withholds unduly, but comes to poverty. A generous person will prosper; whoever refreshes others will be refreshed”.
But before you quickly setup a standing order and channel your funds to one of the many welfare organizations in your country, I implore you to remember this statement, “give a man a fish and you will feed him for a day, teach a man to fish and he will be self sustaining for a lifetime”.

August 21, 2020
We were in class, contemplating our existence as six-year-olds when our class teacher, Mr Gitembo, walked in. Behind him was a radiant young woman wearing a dark green dress, and carrying a sizable  box. Our class teacher had a bigger box accompanied with a toothy grin. "Good morning, class?" inquired the lady. “Good Morning, Mrs...” She had a calming voice, like the auntie who you visited to eat cake and sweets. She had our attention and Mr Gitembo’s too.   "My name is Ms Claire. I work with the library near the school, and I have brought you gifts." She opened the boxes and brought our games and storybooks, then urged us to come closer. We ran to the front and picked a book, or sat down to play a game.   Up till then, my reading was a clumsy attempt.   Trying to understand my elder sister's magazines, father's newspapers, and Jehovah Witness literature left in a drawer to gather dust for years. These made no sense to me. But as I opened the boo
Post a Comment
Read more

December 16, 2020
I was standing there with a rose. At least that's what Mr Patel told me it was. It was red and spiky. "Watch your hands and heart," he said. I was too flushed to say anything. The edges were wilting. I was sure I was a novice buyer for Mr Patel.     I walked into the restaurant and sat at the table closest to the door. I looked strange, a ten-year-old on a first date. My uncle had chided me for looking presentable, I wore a white shirt, trousers, socks and shoes. My nose assaulted by Brut, 'the essence of men'. So here I was nervous, and my heart pounding. This went on for a while before worry took over. "Had the girl forgotten to come? Was she held up in traffic?" Outside was a Saturday afternoon. The two streets in Nanyuki were deserted. I sighed, trying to calm down. My thoughts went back to when I had seen her. She was a new girl in our sister class, and the most beautiful person I had ever seen. Flawless dark skin, and teeth as white as dair
Post a Comment
Read more